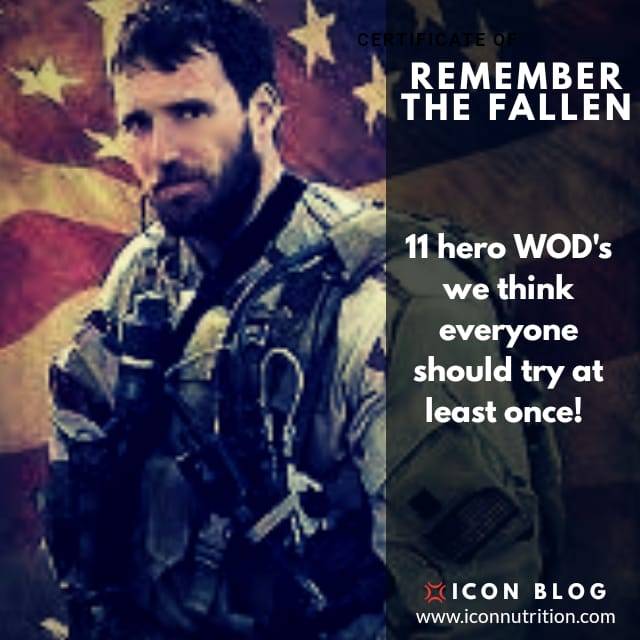 What is a CrossFit Hero WOD?

Good question. Fellow CrossFitters name a number of WODs after fallen service personnel. One of the best known is ‘Murphy,’ named after a 29 year old U.S. Navy Lieutenant called Michael Murphy who died in Afghanistan in 2005.

A Hero WOD is therefore about honoring a fallen hero. Be warned, however; some of them (in fact all of them) are designed to put you in a world of hurt and make you question why you’re doing them. This brings the entire Hero WOD into perspective.

Hero WODs are not supposed to be a daily ritual - we wouldn't wish that on anyone. But if you're feeling a challenge then here's 11 of our favourite Hero WODs we think you should try.

Named after Lt Michael Murphy, 29, who died in Afghanistan 2005.

Named after Nate Hardy, who died in Iraq. Nate is survived by his wife Mindi and his infant son Parker.

AMRAP20: As many rounds as possible in 20 minutes

Named after Lieutenant Andrew Richard Nuttall, 30 who died in 2009. Survived by his parents.

Named after Sergeant Daniel Sakai, 35, who died in 2009. Daniel is survived by his wife and daughter.

Named after the seven CIA members that were killed in Afghanistan by a suicide bomber in 2009.

Named after Sgt Keith Adam Coe, 30, who died in Iraq, 2010. Survived by his wife Katrina Coe, and two sons and daughter.

Named after Captain Brandon “Bull” Barrett, 27, died in 2010. Survived by his parents, sisters, his brother and grandmother.

Named after Army Captain Jason Holbrook who died in 2010. Survived by his wife and parents.

Ten rounds, each round for time:

Named after First Lieutenant Todd W. Weaver died in Afghanistan 2010. Survived by his wife and daughter.